The list of apps found in Apps for Teachers and Students is very comprehensive and each apps is accompanied by the iTunes description pages. This is a great resource and the author has done a fabulous job of putting this list together and keeping it updated. Definitely worth checking out. 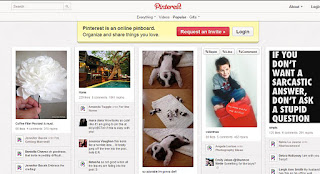 Wow! There are a lot of Pinterest pinboards out there, and with so many Pinterest users, this is a must see site: Pinterest: 13 Tips and Tricks for Cutting Edge Users. Don’t forget, teachers, that Pinterest is great for personal use, but it can also be used for instruction to organize unit resources or collect information the class has found.

Pinterest may be great for instruction, but be cautious when encouraging student use. Since it allows the user to see all kinds of interesting boards, it may not be the best tool for students to use on their own. So, try Stixy for student use instead of Pinterest. The account is easy to set up using student school e-mails, easier to use than Pinterest, and, best of all, there is no long wait for an invitation. Our seventh graders had been introduced to Stixy as a semester assessment for their Texas History class and enjoyed showcasing their personal work and links. They then easily shared their board to their teacher’s Stixy account by hitting the share button and adding her as a contact. This is a great tool for all kinds of projects!

E.H.S. Senior, Whitney Frosch auditioned Saturday at the Texas Educational Theatre Association Convention with 100 other senior actors from Texas in front of 50 different Universities from Texas and other states combined. When a school is interested in a student attending their university they “call back” a student for interviews. Students are selected for interviews based on their talent, merit, resume’, and the school’s requirements for admission. Miss Frosch received 5 callbacks: Angelo State University, a member of Texas Tech System, East Texas Baptist University, University of the Ozarks, McCLennan Community College, and the very prestigious and finest acting conservatory in America, The American Academy of Dramatic Arts in New York/Los Angeles. Some of the Academy’s alumni include, Robert Redford, Elizabeth Montgomery, Danny Devito, Kim Cattrall, Adrien Brody, Anne Hathaway, Kirk Douglas, Grace Kelly, Lauren Bacall, and many more Oscar, Emmy and Tony awards actors and actresses. Miss Frosch was complimented as being a “leading lady” by the Academy’s representative during the interview. I am so proud of Miss Frosch and the way all of our students represent Eustace High School with poise, class, talent and knowledge. The students even impressed Luis Munoz,  Ex-Officio on the Board of Governors for T.E.T.A. and Theater Arts Director for U.I.L. One Act Play Contests with their talent and expertise during a competition with directors & students from other districts. The competition covered the rules for U.I.L. O.A.P. He asked what school we were with and suggested to me they be signed up to be on honor crew for the state meet competition. I remarked, “we intend to be performing at state!”  Munoz replied,  “see you at the docks!”  What a great experience the T.E.T.A. convention and workshop is for our students. We are grateful to be a part of such a wonderful learning experience and appreciate the E.I.S.D.and Board for affording the opportunity to us year after year. Way to represent E.H.S. Theater Arts! Congratulations Whitney! We are Bulldog proud!

Apps for Professional Development is a wonderful resource. I found it very comprehensive and useful. I ound apps that I have now downloaded and will begin using as well.

Students earning Bulldog Pride for the 1st semester are being rewarded today with the following:

In order for a student to earn Bulldog Pride honors he/she must have no absences, no conduct referrals for the six weeks.

The High School faculty and staff  appreciate  these fine young men and women.

The annual Mid-Winter Conference starts this coming Sunday. This conference is designed to provide school district administrator with updated information on everything from the new STAAR testing program to changes at the UIL. Since I will be out of town on Monday, I wanted to go ahead and give you information on activities and events scheduled for next week:

A note on the UIL realignment  – this will determine our districts in football and basketball for the next two years. Volleyball districts will probably be released at a later time. As soon as we know our new district, I will Tweet that information. It should be available on our homepage around 9:15 AM on Thursday.

Students of the Month were recognized for January:

These students are chosen by vote from all EHS staff members.

We are very proud and appreciative of these fine young men and women.

Congratulations to Raymond Shutak and Jacob McCarter for being selected to the Texas Sports Writers Association All State Football Team!  Raymond was named  second team all state offensive guard and Jacob received honorable mention all state for his play at defensive back. The following link will take you to an article in the Athens Review about the 2A all state team: http://www.athensreview.com/sports/x1669702888/HIGH-SCHOOL-FOOTBALL-Shutak-McCarter-make-TSWA-Class-2A-all-state-team

The Eustace FFA Chapter recently competed at the Ft. Worth Livestock Show. As usual, our students did outstanding. Below is a summary of their accomplishments provided by ag teacher Zach Tappan:

Eustace FFA had another great Ft. Worth Livestock Show. The results are as follows:

Samantha Crocker – 2nd place Brahman heifer in a class of 20

Dillon Gragsone – 2nd place Brahman heifer in a class of 42

Chad Tindel – 3rd place Charolais heifer in a class of 18

Brady Tindel – 10th place Brahman heifer in a class of 32

Lane Smith – 16th place Brahman heifer in a class of 20

Congratulations to these students on their accomplishments and on their hard work and dedication. The Eustace FFA is sponsored by Zach Tappan and Theresa Tindel.