Today, EISD is hosting the district cross country meet at 4 Pines Ranch. Below is the schedule of races:

Admission to the meet is free. I encourage everyone to come out and support our cross country runners.

Monday through Thursday will be TAKS Exit retest days. Please see the calendar below for details.

This afternoon, the High School volleyball teams travel to Life Oak Cliff. The varsity will play at 4:30.

The varsity football team will travel to Winnsboro tonight. The game will kickoff at 7:30. The varsity cheerleaders and the award winning Mighty Bulldog Marching Band will be providing support and entertainment.

A reminder that EISD will be hosting the district cross country meet on Monday. The meet will be held at the 4 Pines Ranch. There is no admission charge. The varsity girls will start at 1:30 followed by the varsity boys.

Congratulations to the Mighty Bulldog Marching Band on earning a Division I at the Region 3 UIL Marching Contest!! The Bulldog Band will now get an opportunity to perform at the Area Marching Contest on October 26. Details on that contest will be posted at a later date.

Congratulations to Todd Felty and Crystal Heidle, EISD band directors and all of the band members. A special thank you to all of the parents, family members, and friends for their support of the band. The successes would not be possible without your help.

A reminder that our Middle School and JV football teams will be competing against Winnsboro this afternoon starting at 5:00.

Congratulations to all three High School volleyball teams on their wins against Red Oak Life last night. The varsity team is now 12-0 in district play.

The Eustace ISD Board of Trustees held their regular monthly meeting last night. The meeting started at 7:00 PM and was held in the High School library. Actions taken by the Board included:

Tonight, the Eustace ISD Board of Trustees will hold their regular monthly meeting. The meeting will start at 7:00 PM and will be held in the High School library. Everyone is invited to attend.

The Board will hear the following reports:

The Board will consider the following action items:

A reminder that our High School volleyball teams will be in action tonight against Red Oak Life. The 9th grade game is set to start at 5:00 PM.

Congratulations to the Mighty Bulldog Marching Band on placing third at the Cedar Creek Marching Festival this past Saturday in Mabank. The Bulldog Band finished behind John Tyler and Clarksville. The band will be performing at the UIL Marching Contest this Wednesday in Mesquite. The Bulldog Band will march at 3:15.

The varsity volleyball team remained undefeated in district play with a 3-1 win over Malakoff on Friday. The Lady Bulldogs continue district play this week hosting Red Oak Life on Tuesday and then traveling to Life Oak Cliff on Friday.

The varsity football team lost a hard fought game against Quitman on Friday. This week, the Bulldogs continue district play traveling to Winnsboro.

Both the JV and varsity cross country teams won their division at the Eustace Cross Country Meet this past Saturday. The varsity girls placed 2nd.

After warning that school districts might face a lack of funds for their meal services, the Texas Department of Agriculture released a letter late Friday that stated the additional funds were available. The letter stated that there was sufficient funding for several months.

I want to give a special shout out to the Eustace Varsity Cheerleading Squad on their halftime performance at the game on Friday. The “throwback” routine that they did was absolutely fantastic!! There will be a video of the performance on the Eustace ISD YouTube page later today. 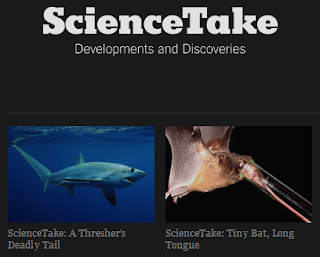 Science Take Videos is a series of 60 to 90 second videos hosted on the science page of the New York Times.  These videos do quite a nice job of describing the qualities of animals that we, as humans, find fascinating.  A small sampling of the Science Take Videos explaining these unique qualities include sharks, dolphins, spiders, and even bacteria.  Science Take Videos can be a nice supplemental resource for your science curriculum.

Science Take Videos is a small piece of the New York Times Science site both are definitely worth checking out.  Big thanks to Richard Byrne and his blog Free Technology for Teachers for sharing this site.